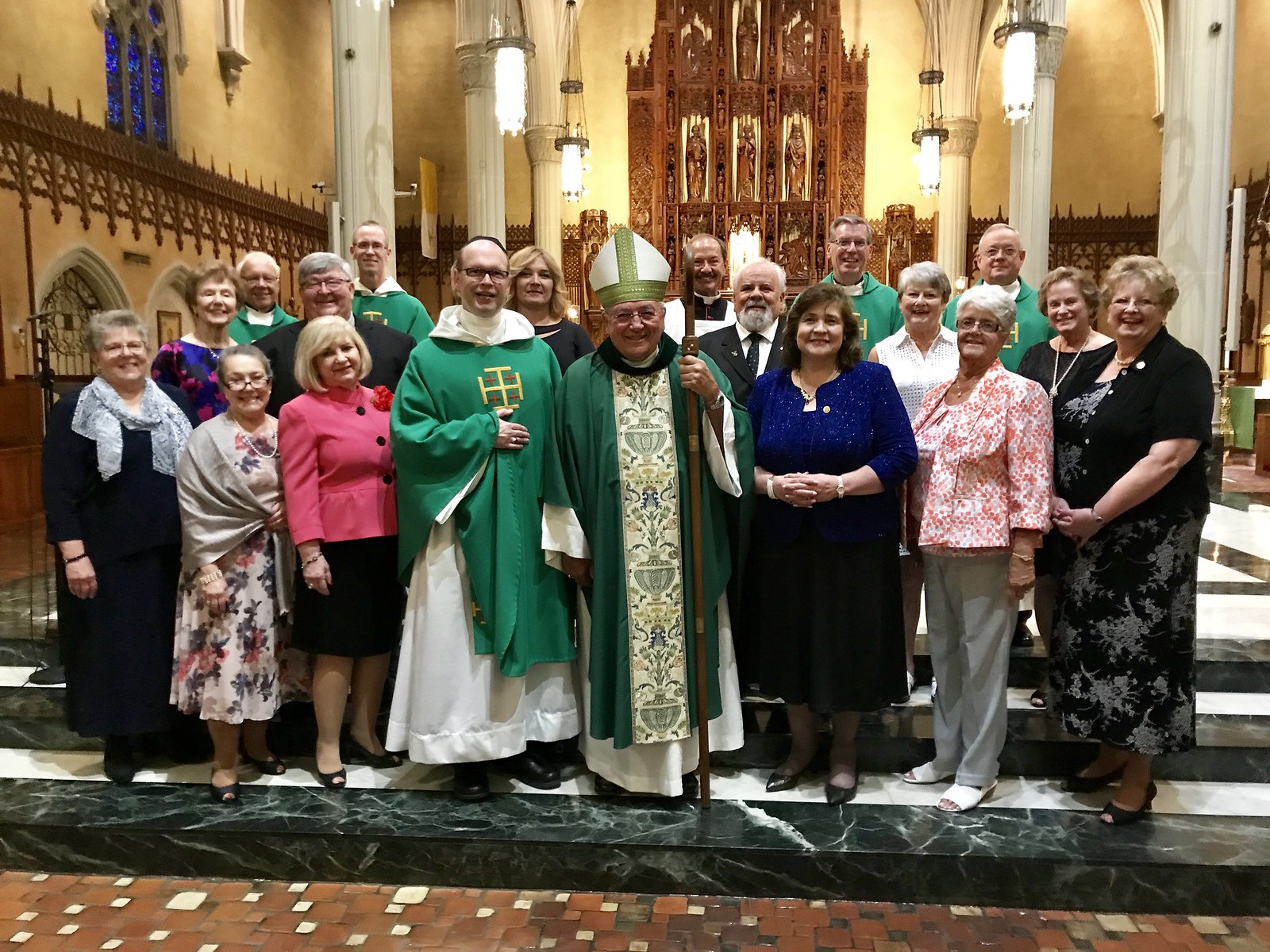 Inspiring music for the liturgy was led by Greg Heislman, Director of Music and Organist at the Cathedral of Saint John the Evangelist.

Following the Mass a Gala Banquet was held at the Cleveland Marriott Downtown at Key Center, beginning with a cocktail hour at 6pm followed by dinner at 7pm. Sue Ann M. Seich, FCSLA National Director, was the Mistress of Ceremonies. After the National Anthem led by veterans in attendance and an invocation by Most Reverend Roger Gries, OSB retired Auxiliary Bishop Diocese of Cleveland, National Auditor Dennis Povondra gave the toast that led to a delicious dinner. Following dinner, National President Cynthia M. Maleski, Esq. gave an inspiring congratulatory message. The highlight of the evening was the 125th Anniversary Video which told the story of FCSLA in a moving way, from immigrants arriving through Ellis Island, to the mine disasters and mill accidents that left Slovak families without a breadwinner, and the determination of our foundress Anna Hurban to begin an organization with eight other Slovak women in 1892, that has persevered and grown in 125 years to an over $900 million dollar business with 115,000 members, doing business in 48 states and the District of Columbia.

Everyone in attendance left with a copy of the DVD, which can be requested by calling our home office.

Virginia Holmes, National Trustee and Chair of Philanthropic & Scholarship Committee announced the 125th Anniversary grant recipients and National Treasurer, Stephen Hudak shared the outstanding results to date of donations to Anna Hurban Scholarship Fund, this year’s President’s Appeal. Donations for the appeal will be accepted throughout the remainder of 2017.

State Representative Marlene Anielski, House District 6, Ohio House of Representatives, and FCSLA member, attended the gala and presented President Maleski with a proclamation from the House in honor of our 125th Anniversary.

National President Cynthia Maleski, Esq. honored our long time actuary Robert Bruce for his years of dedicated service to FCSLA. The evening ended with a representative from each FCSLA District leading everyone in singing God Bless America. Music during the cocktail hour and throughout dinner was provided by Gypsy Stringz, led by George Batyi from Pittsburgh, PA. As a special touch for us the group added a cimbalom player to their group from Cleveland, Ohio. A cimbalom is an elaborate stringed instrument of the dulcimer family used in small music ensembles by central European Roma (Gypsies). The entertainment made the evening even more memorable!

The anniversary weekend continued on Sunday, July 30th, with an open house at the FCSLA Home Office in Beachwood, Ohio. In addition to the 125th anniversary, 2017 also marked the 10 year anniversary of the dedication and opening of our current Home Office. In the months leading up to the celebration the patio area behind the office where the statue to St. Ann, our patron saint, is located was refurbished. As the focal point of our open house the statue was blessed by our National Chaplain Monsignor Peter M. Polando during the open house. After the blessing a beautiful painting of our foundress Anna Hurban was unveiled by two of our National Auditors, Barbara Sekerak and Dennis Povondra after comments by National President Cynthia M. Maleski, Esq. President Maleski talked about our foundress and how she chose to serve the organization she founded not as President, but rather as an Auditor.

Mayor of Beachwood, Ohio Merle S. Gorden attended the open house and blessing and after presenting President Maleski with a proclamation from the city talked about the positive and cooperative relationship the city has maintained with FCSLA for many years.

Everyone in attendance at the open house enjoyed delicious light fare, desserts, and refreshments!

The weekend of festivities was a fitting way for FCSLA to mark its 125 years of success as it soars to even greater heights in the future! Click here to view a photo gallery of the weekend’s events.