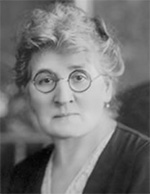 Zwiazek Polek w Ameryce, Polish Women’s Alliance of America (PWA), was founded by Stefania Chmielinska (1866 – 1939) on May 22, 1898, in Chicago, Illinois, as a fraternal benefit society for Polish immigrant women. Its mission was to provide financial security to its members, and to preserve Polish culture and heritage. And this mission continues to this day.

Fraternal benefit societies were popular institutions in 19th century America, affording social and fiscal services not available from other sources. The financial foundation of these organizations, often established by ethnic or religious groups, was life insurance. At a time when life expectancy was much shorter than today, and antibiotics were not widely available prevent deaths from infections and disease, burial expenses could ruin a family struggling financially, especially if more than one member of the family succumbed to an illness. Fraternal societies offered life insurance, emergency aid, and social and educational benefits to help immigrants adjust to life in America and to deal with emergencies as they came up.

However, women were not only excluded from leadership roles in these fraternal organizations, they were not able to purchase life insurance policies in their own names. The PWA was a pioneering beneficial society, founded by women for women, and it continues as one of the oldest and largest women’s organizations in the U.S. Its establishment was a historic achievement in an era when women did not have the right to vote and were excluded from most businesses, professions, and institutions of higher learning.

The organization grew quickly, attracting members throughout the country, offering women a place to develop leadership skills, find assistance, foster ties with their homeland, and engage with the world at large. Soon, PWA members found themselves entwined with historic events of their time – the suffrage movement, which impacted their daily lives, and Poland’s struggle for independence, which impacted the families they had left behind. Ten years after its founding, PWA had 7,000 members and 25 years later 26,000; membership peaked at 100,000 in the 1960s. Today it numbers 30,000 members, making it the largest Polish women’s organization not only in the U.S., but in the world.

In 2017, PWA merged with FCSLA Life and continues to offer a wide array of life insurance plans, annuities, and other financial products to its members. And it continues to support charitable institutions in Poland and in the U.S., promote Polish culture and heritage, and lobby for Polish causes. It also offers college scholarships, travel opportunities, and other educational, social, and youth activities to its members.